Today’s biggest challenge for orchestras? Getting enthusiastic young people into the concert hall. This blog post by Bernard Lin won an honorable mention in our recent American Orchestra Forum blog contest. He is student at Rutgers University in New Jersey.

Young audiences undoubtedly generate the most enthusiasm in music of all genres. Their willingness to buy merchandise, attend concerts, and constantly blast music indicate their ability to follow their favorite artists with utmost intensity. Half a century ago, a young Leonard Bernstein captured the hearts of children across America as he led the New York Philharmonic in Young People’s Concerts, teaching them the basics of music, introducing them to titans such as Mahler and Tchaikovsky, even opening a door to jazz. In the 21st century there seems to be an unfilled void, a gap that black and white DVDs of Bernstein cannot mend. This may very well be the biggest challenge today for orchestras—a lack of attendees in the future of concert halls.

The distance between modern young audiences and classical music can easily be attributed to the rise of other genres, but they are not entirely at fault. By forging strong bonds, artists became part of a young adult’s life. Even now, teens love to post lyrics as a means of expressing their feelings, but rarely will a line about a broken heart be quoted from Madama Butterfly or La Boheme. My experience as a violinist was crucial in pivoting me towards the New York Philharmonic, but playing an instrument doesn’t have to be the factor that causes young people to become engaged with an orchestra; young people are inspired to learn guitar after they hear a rock band, not the other way around.

Accessibility has been a key factor in connecting with young audiences. Bands will often show up anywhere and everywhere for appearances and signings, keeping close contact with their fans online as well. Orchestras have done a great job trying to catch up on social networks—I can get a quick reply to a question from the New York Philharmonic Twitter account and browse extra content on its Facebook page.

I also found the New York Philharmonic Offstage events to be a great opportunity for outreach to the public. At New York Philharmonic Offstage, artists chat with Jeff Spurgeon, a radio host from the local classical station WQXR, and sign CDs afterward. I learned just as much as I would have if I were in the concert hall and I finally had some kind of investment in the artists themselves. I have CDs on proud display in my room the same way I’m sure a rock fan would display a band’s signed poster or a sports fan would display a signed baseball. It was also here that I confirmed my belief that young audiences make for the greatest fans: at the last event, a little girl showed up in a homemade Yuja Wang t-shirt, squirming in her seat as she waited for her turn to ask a question and get a picture with her idol. 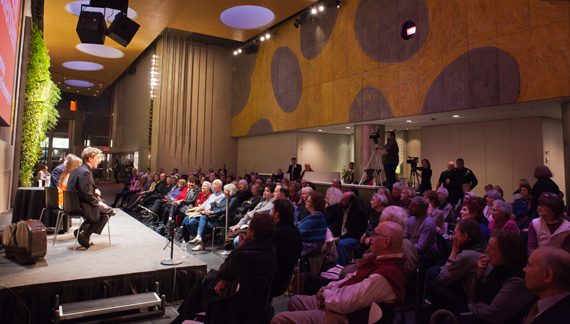 Logistically it would be impossible for orchestras to make appearances together, but to young people, who are quite impressionable, appearances in schools and community centers could make a great difference. I remember when I was little I could hear Philharmonic principal cellist Carter Brey play chamber music at a local synagogue for a dollar. I still look for him every time I go to a concert. An appearance on say, national television couldn’t hurt either. People are less inclined to read the newspapers these days and even if they pick one up, they are probably going to skip the reviews and notices of upcoming concerts. Yo-Yo Ma has showed up twice on the Colbert Report to great acclaim and it definitely helped sell the albums he was promoting. It would be great to see a Dudamel or Gilbert be a guest on any of the late night shows giving their orchestras the much needed exposure.

Even with all of the orchestra’s efforts, however, something seems to be missing for others in my generation. First of all, I am sorry to say that the vast majority of my friends recognize a few bars of classical music and know the rest through ringtones (I am ashamed to say that I recently discovered that a certain ringtone was actually, well, Ravel’s Bolero). To have an audience for the future, one has to be nurtured and educated about the beauty of classical music. There are a lot of young people in America and not all of them have access to a great orchestra. Somebody has to re-teach the lessons that Bernstein taught and mold them for the new century (something tells me that in an age of 3D cinema, black and white DVDs won’t suffice). And when they do, all will be well and every concert will be sold out! Fine, maybe not, but you can bet that at least the orchestras will still have an audience going into the 22nd century. In the meantime, I will shamelessly blast Ravel’s Bolero in penance and think of a question to ask Magnus Lindberg at tomorrow’s New York Philharmonic Offstage.

Bernard Lin currently studies Classics (Ancient Greek & Latin) and Economics at Rutgers University. He served as concertmaster of the Young Players Philharmonic from 2007-2012 and has performed with Rutgers Sinfonia and Rutgers Symphony Orchestra. In addition to violin, he also plays piano and viola.